Leatherjackets are the larvae of crane flies, or daddy-longlegs. One female fly can lay up to 300 eggs in a lawn in late-summer. These hatch after a couple of weeks into grey-black, legless larvae that have a tough, leathery skin, hence the name ‘leatherjacket’.

From autumn through to summer, the larvae feed on the roots of plants, eventually growing to 5cm in length before pupating and emerging as adult flies in late-summer.

How will they cause harm to my lawn?

If there are enough numbers, they can be a very destructive lawn pest. They can eat the roots to such an extent that it is possible to peel the turf back by hand because there is insufficient root structure remaining to hold the turf to the ground. Whilst an attack of this scale is quite rare smaller infestations are more common causing yellowing patches and areas of your lawn dying off.

The lawn can look a mess and very untidy after an attack from Leatherjackets unfortunately it takes time for the infestation to become noticeable.

Signs will first show late July and through August. This is the time that the Female Crane fly returns to the lawn to lay eggs. The eggs hatch around two weeks later in the soil beneath your turf & start feeding on the roots, as winter comes the feeding slows down, however as winter heads into spring, they feed vigorously on the roots killing all the nice grass above. If you see Daddy long legs around your window sills or flying around your home keep a watch on the lawn, once large birds like Rooks Magpies and Starlings realise there are leatherjackets under the surface, they will aggressively forage ripping up the already weakened lawn roots.

Call and we can arrange to apply control methods.

Prevention is defiantly better and cheaper than the price of repairing a damaged lawn. 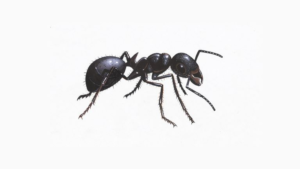 These insects are black or dark brown and nest in soil, lawns, at the base of walls or under flat stones. Ants are social insects; they live in colonies that consist mainly of workers – sterile, wingless females.

In July and August, winged males and females emerge for mating flights. They are about twice the size of the workers. Climatic conditions determine when these flying ants appear, and all the nests in any one area will generally erupt at the same time.

After mating, the males die, while females shed their wings and seek suitable nesting sites. Birds take many ants during these mating flights and only a few females (queens) survive to start new colonies.

What are chafer grubs?

Chafer grubs live in the soil and are the larvae of chafer beetles similar in appearance to the Witchety grubs, the favoured snack of Bear Grylls. They have plump white bodies curved in a C shape, light brown heads, with three pairs of legs at the head end. They measure about 18mm in length. There are different species and they either enjoy feeding on decaying plant material or plant roots. There are several species that enjoy grass roots and these can-do terrible damage between autumn and spring when the grubs are reaching maturity.

How Do I Know if I Have A Wasp Nest?

If you see wasps entering & leaving a hole in the ground, a wall, roof or any other part of a building between May & November then you probably have a wasp nest.

You may be getting ‘unexplained’ wasps inside a room which may indicate a nest nearby. In the Autumn as the days get shorter wasps get attracted to lights inside building which they confuse with sunrise.

Why Should A Wasp Nest Be Treated?

They build relatively small nests in trees and bushes at eye height. This means gardeners can easily stumble across these nests and be attacked. Wasps patrol the surface of the nest and then fly in the faces of people who come too near.

If you don’t treat a wasp nest it will eventually die out but before this happens the nest will produce approximately 100 fertile Queens that will hibernate and start nests the following year. A nest will get larger until the Autumn.

The workers have finished their job of nest maintenance & collecting food for grubs and are now feeding on rotting fruit (this makes them drunk & more aggressive).

Every year there are deaths from wasp stings. Although they do some good by feeding on flies, caterpillars and other insects the wasp numbers are probably artificially high because buildings supply unlimited nest sites which in purely natural conditions would be restricted to caves, hollow trees and other natural cavities. They cause massive amount of damage to fruits in the Autumn.

How to rid your property of wasps

The most effective way to get rid of wasps is to treat the nest.

Don’t be tempted to block the hole up, this will make them angry and aggressive but will not kill the nest.

They will find another entrance & may even come inside the house. Some species of wasps will build outside in bushes and trees. You will see a grey or brown structure made of a papier Mache type material. Wasps are aggressive and will sting readily if they think the nest is in danger.

Removing a nest can be dangerous, wasps inside the nest will feel threatened and will become very aggressive causing them to sting you and your others as they defend their colony and young.

To reduce the risk of stings to you and your family talk to us for a professional treatment this will eliminate the wasps and keep you safe from the threat of stings.